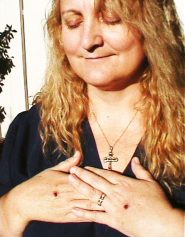 All Types of Healing May Occur!

There is a whole spectrum of what might happen – on the one end, sleeping better at night, a feeling of calm peacefulness, less pain, more confidence and a feeling of love – on the other end, the tumors go away, the cancer disappears, the eyesight comes back, infertility disappears, the hearing aids are thrown away, arthritis disappears, crippled people walk, people awake from comas, receive visions or messages from God…anything may happen! Here are some samples of healing testimonies from our files:

God is the Healer

“Our Heavenly Father is the healer, and hearer of prayer. He is the Divine Doctor, I am just an assistant nurse happy to be in the room. He desires to help us and let us know he exists and cares for us. Healing is one of the ways The Big Guy chooses to do that!” – Blessed Tiffany Snow

Send Us Your Testimony!